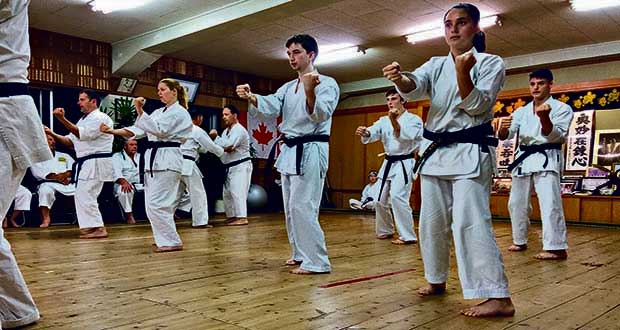 As part of a rigorous two-week training schedule, several students and instructors were invited to test for their next rank.

All were assessed by their masters on their knowledge and application of karate basics, individual and partnered kata patterns, and fighting techniques, with their peers present to observe, encourage and learn. Sensei Bob was promoted to higher instructor-level ranks in recognition of his knowledge and contributions to both karate and kobudo.

Some of Sensei Bob’s students who assist under his guidance with training and coaching also attained higher levels, including senior students who stayed back to instruct classes at Swan Hills’ Midland and Mount Helena dojos, their promotions certified in Okinawa by Sensei Seneha.

All participants gained valuable skills and insight into traditional Okinawan martial arts, developed greater awareness and appreciation of the unique cultural identity of the Ryukyu Islands in Japan’s Okinawa prefecture, and made lasting friendships in Okinawa and across Australia.

Sensei Bob said he was  surprised and honoured to be promoted, but was even prouder of the achievements and standard displayed by his students.

“I have done the best I can to follow the tradition and show them the way, and the exceptional amount of time, spirit, and diligent practice they have put in has paid off,’’ he said.